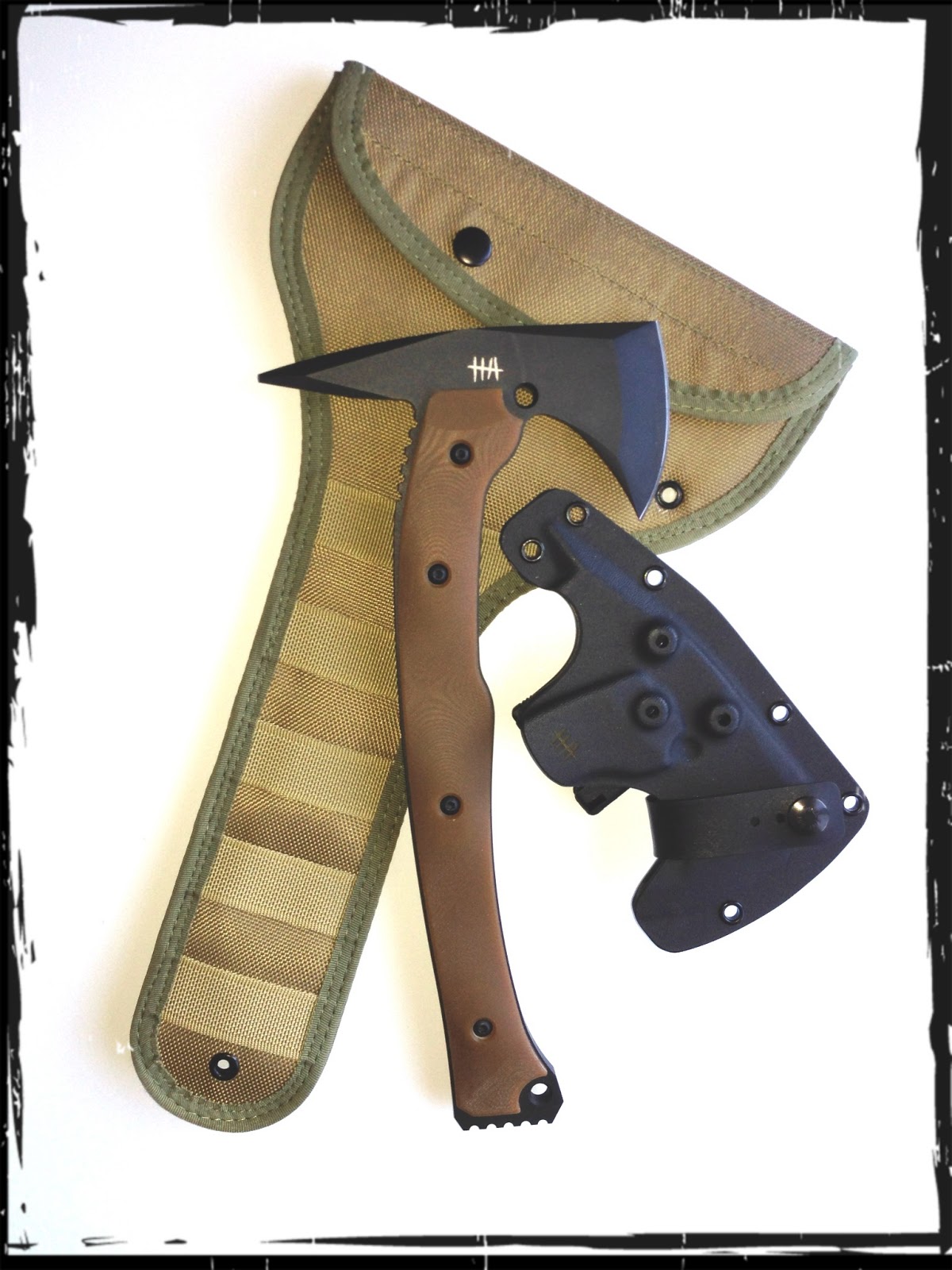 Upon returning home from my recent deployment, I went to visit Darren Cole at One Shot Tactical Supply. He is a long time friend from before his current incarnation as a 'bonafide Merchant of War'. That moniker is a long story; ask Darren about it when next in the store. Prior to deploying to the Sandbox again, I have put OSTS in touch with Hardcore Hardware Australia. I was familiar with their tools and blades from an Aussie buddy of mine from previous tour in Afghanistan. We had done some stuff together and I had seen the high quality of their work up close. Anyway  when I returned there was a package from HHA waiting for me: a LFT-01 tomahawk and a LFK-02 knife! 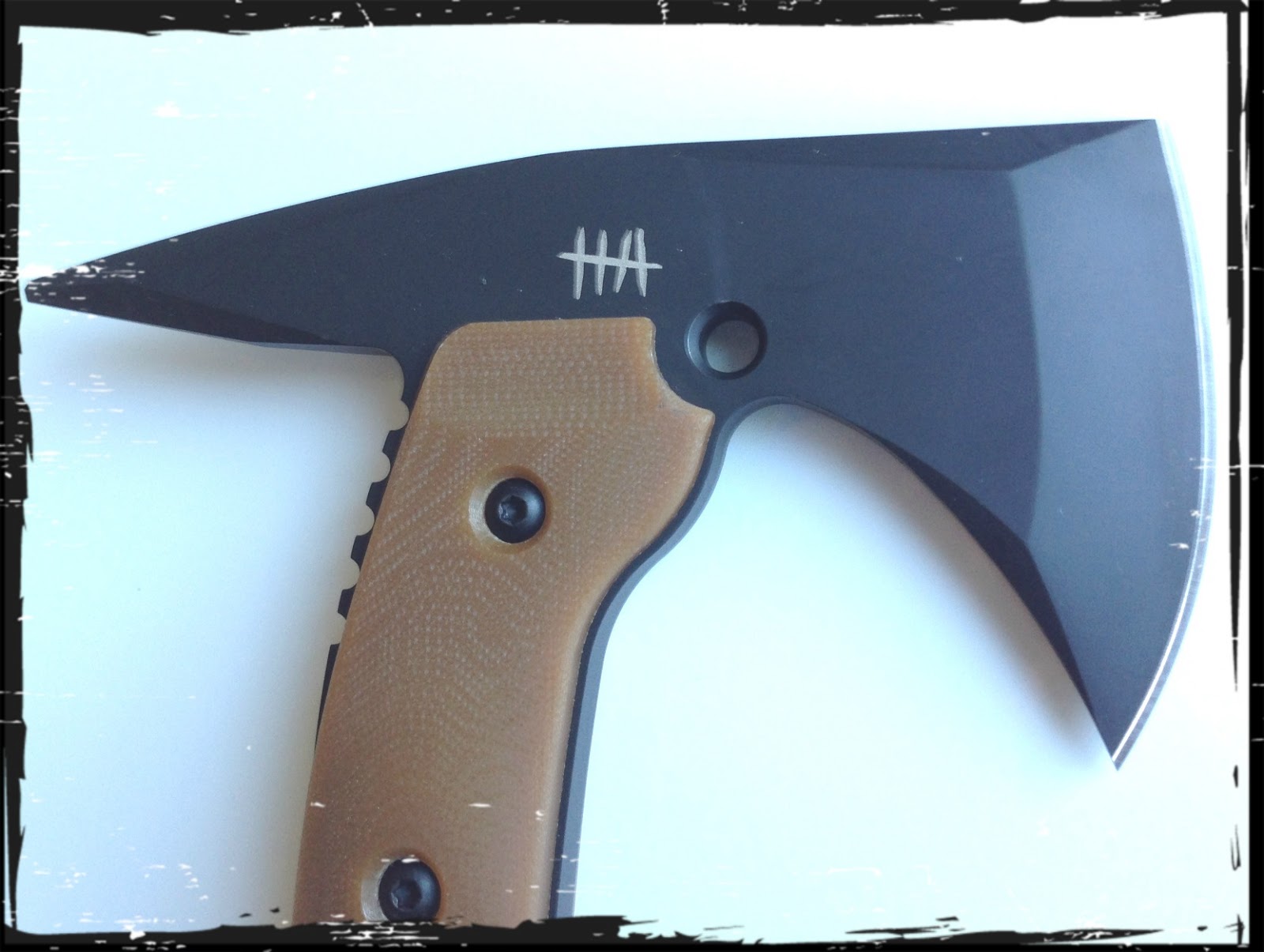 The LFT-01 tomahawk has been designed as a compact Method of Entry (MOE) tool. It is two third the size of a standard tomahawk without giving up any of the performance.  As an MOE tool, It must be able to be used as a cutting tool, pry bar, hammer and drive spike. 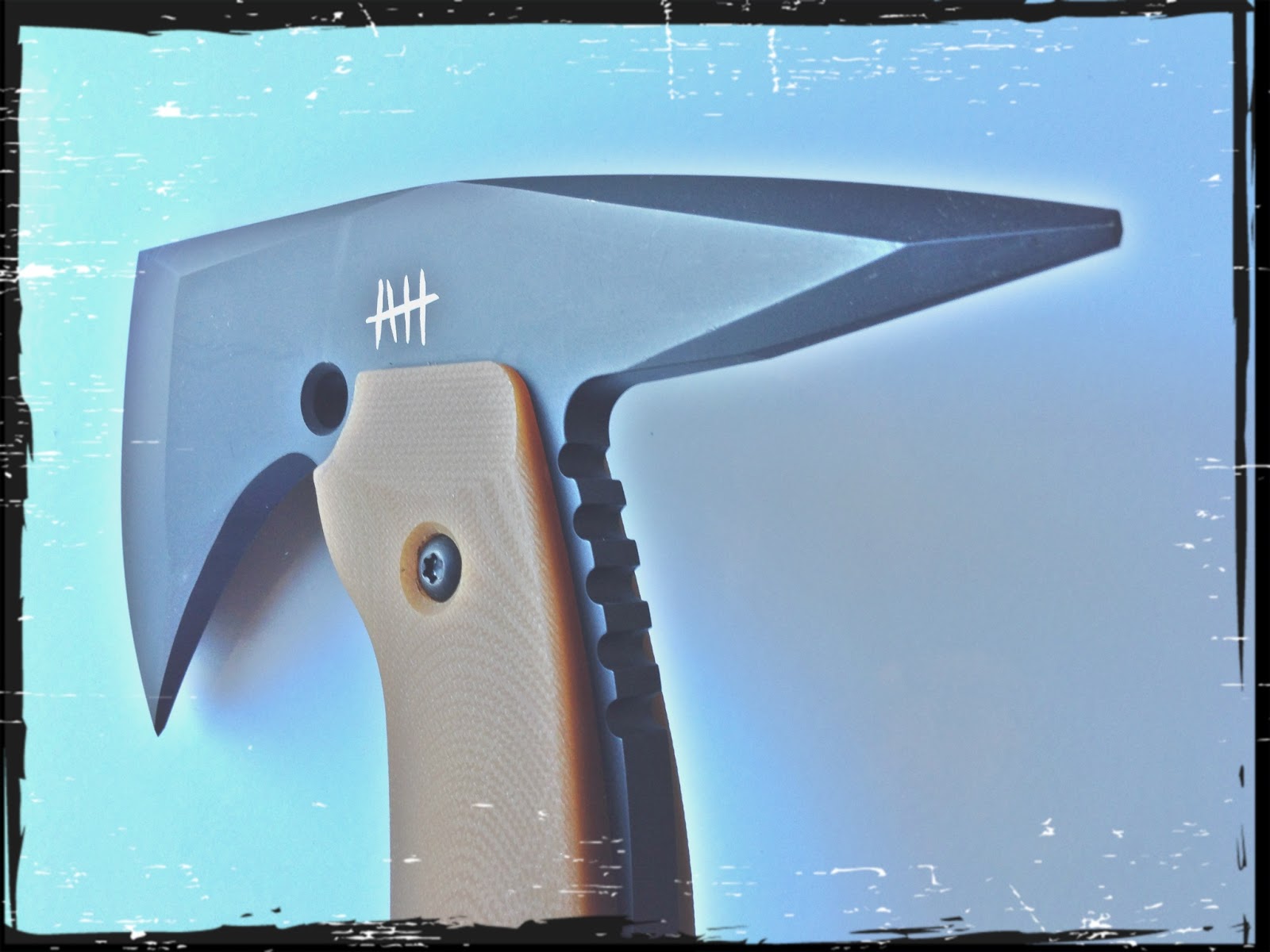 During a continuum of operations, durability and long lasting sharpness are a required attribute. The design of the LFT-01 include a primary cutting blade, a secondary Tanto style rear spike and a pommel designed for hammering. The thickness of the continuous tang lends it to pry bar work once the blade or spike is imbedded. 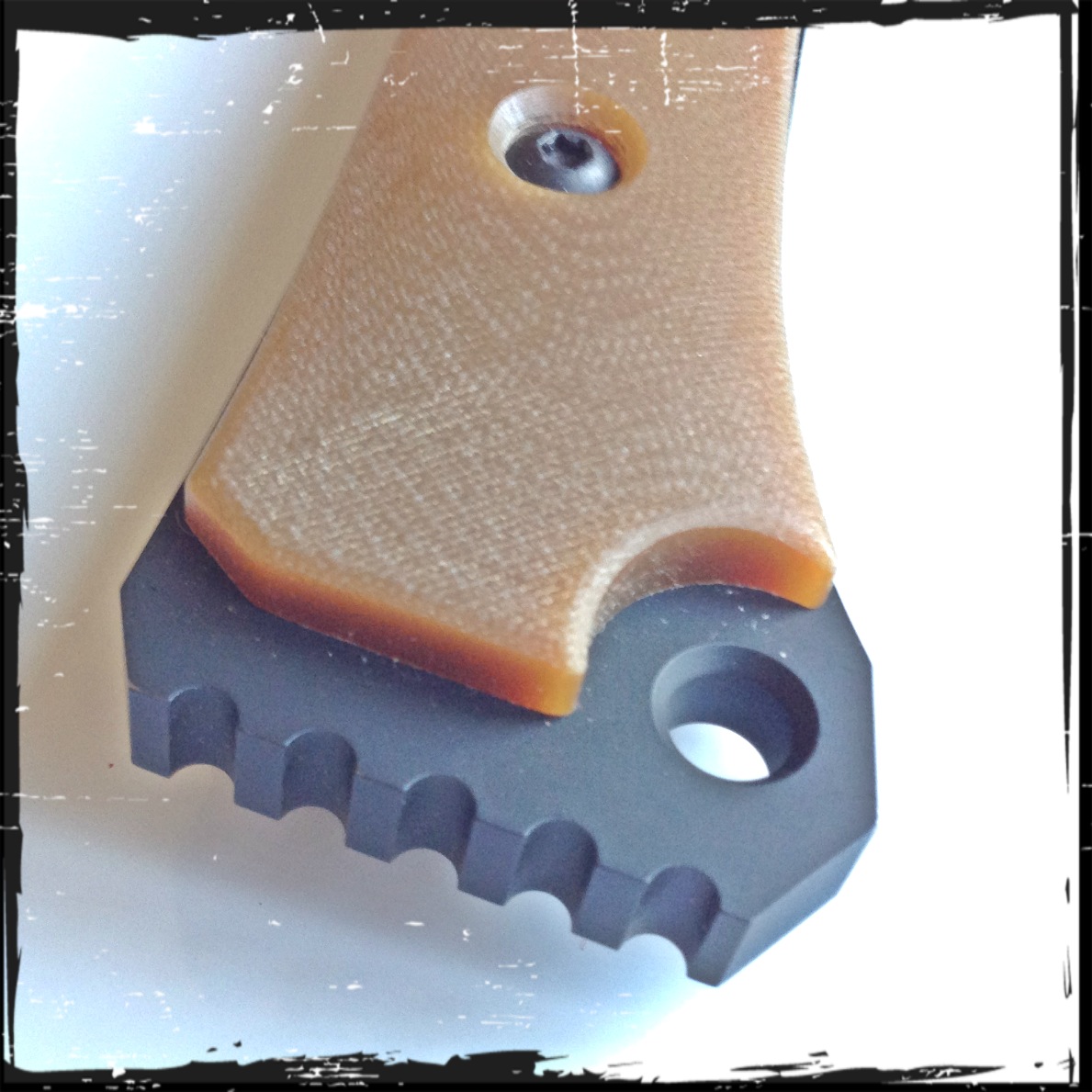 HHA uses D2 tool steel for their tools and blades, not a high carbon blade steel. D2 is very wear resistant retaining its hardness up to a temperature of 425 °C (797 °F). It is widely used for shear blades, planer blades and industrial cutting tools. The advantage of using industrial tool steel are durability, long lasting sharpness of edges, corrosion resistance and tool steel reduces the impact shock felt by the operator. The handles are G10 fibreglass resin baked and compressed for superior UV and environmental resistance. The texturing of the handle allows for positive grip without the loss of fine control when transitioning between applications. 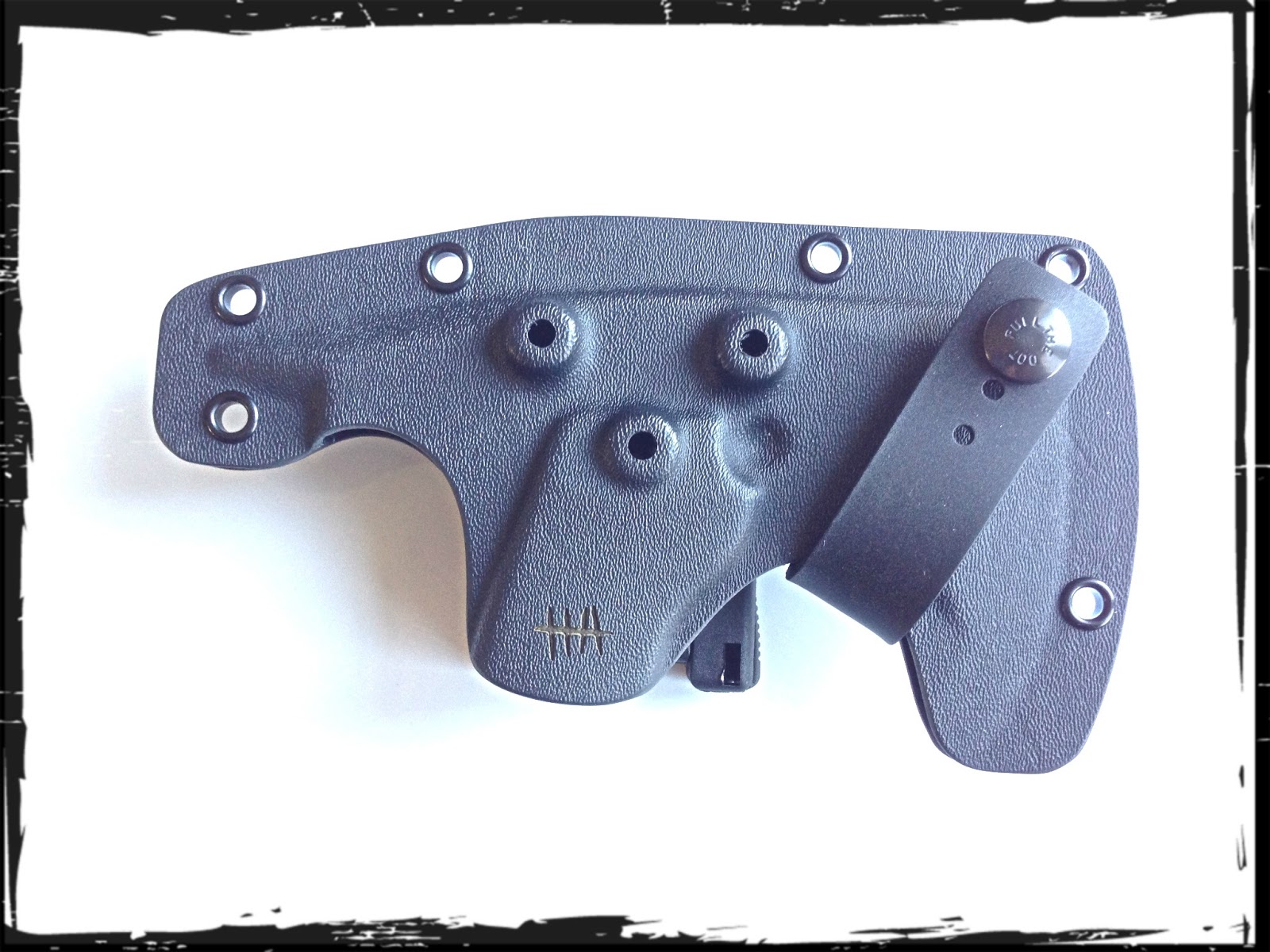 MOLLE and belt compatible, the Kydex sheath has a large Blade Tech Tek Lok which can be set up for ambidextrous use. Tek Lok  will allow attachment on belts and webbing ranging from 25mm (1") to 50mm (2"). The pull dot snap holds the LFT-01 in place will making tactical movement quite well. A well thought out design, the kydex sheath allows for presentation and stowing of the LFT-01 easily without additional assistance.

Before joining the Canadian Armed Forces Regular Force, I was a farrier/blacksmith in Eastern Ontario for six years while serving in the infantry reserve. Having some experience with metal forging and types of steel, this tomahawk is built to surpass operational requirements. When combined with the Hardcore Hardware Australia guarantee, you have a MOE/CQB tool that will last a career. The use of tool steel for the operator translates into a minimal maintenance tool. When hammering or striking,the D2 steel with the thick full length tang absorb the majority of the impact shock. This will reduce fatigue on user.

This is an excellent tool that fills many niches within an operational elements requirements as well as being useful for survival, search and rescue or disaster preparedness.