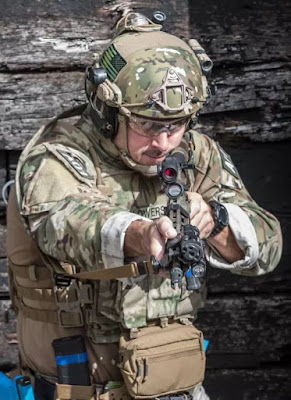 "My team is hostage rescue capable, we have a Bearcat.”

Bitch please. I seem to be having this convo a lot lately, so much so, that I found myself thinking about it while I was fucking about on my bench putting together a new gun belt. I have been a student of Hostage Rescue tactics, techniques and procedures for quite some time. Obviously that includes dissecting incidents that have gone very well and others that did not.

Most SWAT cops have heard the priorities of life and most can parrot them back to me on demand.

I remember when this shit first started coming to the forefront and some cops not only resisted it, but flat out called it bullshit. Like a lot of stuff that has history, especially in a game where longevity is rare, it often gets watered down or the prevailing message behind the words. Most SWAT dudes today will say, “Fuck yeah, of course I believe that dookie and will do everything in my power to abide by it.” But it wasn’t too many years ago that I was reading a post on a popular fighting man website, and some dudes weren’t down with that shit at all. A very well-known tactical trainer at the time was essentially saying that his life and any cops life was not worth a hostages. I recall being stunned by his words and I thought about rebutting him, knowing that the ensuing dogpile would launch and I would be shouted down as a dumbass with false bravado and tombstone courage. As my fingers hovered and I was deciding whether it was worth it or just say fuck it, a dude named BasicLoad did the job for me. I have often repeated his words in training, or at least a portion of them. He made the comment that if he killed a hostage, he would kill himself. Now when you consider the weight of those words, his willingness to put in ALL the work necessary to make sure that didn’t happen should be obvious. Years later I would meet him and know in my heart that he was not, and is not, bullshitting when he says it.

Hostages first, and what that means is that I must be willing to die in order to protect hostages. Sometimes that’s as simple as the bad guy getting his vote. As good as we may be with the tools of our trade, it is possible that a bad guy fires one over his shoulder out of a .380 and that fucking thing hits me right in the eyeball. I will RIP knowing my mates finished the job that I never got a chance to start. It also means that I need to POSITIVELY identify suspects before I get to pull a trigger. All the while, the suspect can fire whenever and however he wants, his rules are different. So I may HAVE to get shot while I sort shit out, I may also HAVE to get shot because while I may have ID’d properly, I can’t make the shot presented. This may be because I lack the requisite skill for the problem, this could be the physical skill of pulling a trigger and guaranteeing the hit. It could also be the skill of CPU speed and actually seeing, and predicting, the exact moment the shot will present itself.

On my team if you shoot a hostage in training, it gets documented. If you do it twice, both incidents are reviewed and your ass is likely being removed from the team. I have heard a lot of excuses about why some teams don’t do that. The prevailing reason is that they wouldn’t have a team left or the talent pool is too shallow. My response is that once you institute such a policy, you won’t have to remove anyone, because the penalty will start to ingrain the proper level of discipline about that shot being fired, and the team culture will change for the better.

There are a multitude of reasons that some teams are not Hostage Rescue capable. Lack of selection standards is one of them. An agency of 50 simply cannot field a team of 21 quality dudes. The odds of all 21 being sufficiently capable of the job requirements for HR, is higher than winning the lotto. With a talent pool of 700 cops, a team of 36 represents 5% of the available resources. Opportunities for the right men putting in for the job, and selecting them is higher. But even within that, if the team Culture is such that “Minimum Men” are the rule, that team will still suck at the task.

“Think thou that these magnificent, victorious legionnaires became what they are through some arbitrary stroke of fortune? Nay! They do not sit around congratulating themselves in the wake of victory. They spend every moment refining and improving their craft. Without apology, they pursue excellence. Each one knows and understands that he alone stands between the empire and oblivion. Watch them! Indeed, they appear to have been born with weapons in their hands!”

The culture within the team must be one of pissing excellence. Dudes are not “forced” to PT, they do it on their own. If the team does PT, this makes the boys happy and is never viewed as punishment by the men. Men such as these whistle while you run, because they know it is valuable and ultimately preparation for the conflict that is coming. These type of men offer no excuses for their firearms skill, they simply get after it and though the bar may be raised repeatedly, they roll up their sleeves and put in work because they know that on any given day it will matter. This same group of men needs no ass chewing if they shoot a hostage in training, they are already considering Seppuku for dishonoring themselves and their mates. Culture matters, and in fact it may be the single most important factor for a team.

Last is training and budget since they often go hand in hand. A team that is more interested in quitting time than training may succeed on a HR, but it will be dumb luck. Rigorous training for the task is fucking required. Obviously the teams TTP’s need to be well ingrained, but the men must also be able to execute them on demand. All of the subtasks that will likely be used in HR need to be able to be done in their sleep; breaching, medical, shooting, fighting, and so forth. The ability to adapt TTP’s for the given situation need to also be trained, no plan survives first contact. And the men need to be trained to accept being shot at as part of the task, and their ability to check fire, instead of return fire, should be regulated in training as well.

In no way, shape or form am I saying that the men should expect to be killed or injured. Quite the contrary, the attitude of the team that is well selected, disciplined, trained and ready will be that this fucker chose the wrong jurisdiction to take hostages. Confidence is, as confidence does. If your team is a spilled bottle of fuck while training HR, do you really believe they will be something different on the real day? The answer is of course not.

I have often said that my goal for my team was to be the best Hostage Rescue Team on the planet. If we can be that, the dope warrant is easy. The single barricaded guy is easy. On a recent training day with role players, one of my good mates shot the hostage. The situation was tricky, the hostage was essentially standing at parade rest in front of the hostage taker. The hostage taker poked his arm and gun through the hostages bent arm. When the men entered, he started firing and my good mate processed the hand and arm as belonging to the hostage. He fired and put excellent hits on the hostage. He immediately said “Fuck”. With no excuses he realized that he had fucked up bad. I don’t care how tricky the scenario was or that we were hitting with NVG. He KNEW what happened right after he fired the shot. We discussed it and during that conversation I told him the reason the hostage was dead is because during that few seconds, RETURNING FIRE WAS MORE IMPORTANT THAN THE HOSTAGE. The moment he fired, he saw it for what it was. In short, he lost his personal discipline when he needed it the most. No crying, no whining, no bitching. He agreed with the assessment, and based on his character it will be unlikely that it happens again. I love this guy, he is as solid as they come and a dude that any team would be lucky to have. But I told him I was writing it up because the teams culture of accountability and excellence demands it. His response was "Of course".

Don’t like that? Well tough shit, the solution to you not liking it is quit your team. Or better yet don’t apply at all. I assure you the team is better off without you. If you really believe in the priority of life, then have the courage of your convictions and get your mind right that you’re already dead before you assault. And for fuck sake stop thinking your equipment makes you a good team, it is the right men and the right culture.

Bill served in the US Army for 6 years and has been a Police Officer for over 25 years. He has spent the bulk of his LE career assigned to SWAT holding positions as a Sniper, Ballistic Shield Man, Mechanical/Ballistic Breacher, Assistant Team Leader and Team Leader on a large and busy regional SWAT team.