With the speed of modern operations, lightweight, compact, robust equipment that packs lots of punch is the rule, not the exception. Advanced technology and weapons have made allied forces highly mobile and more lethal. Between carrying those advanced technologies, the batteries required for it and modern ammunition loads, weight and space are at a premium. It is a game of ounces. Ounces equal pounds and pounds equal pain. Handheld lights are no exception. Modern handheld tactical lights must be compact, lightweight  robust and longer lasting with a blinding output. 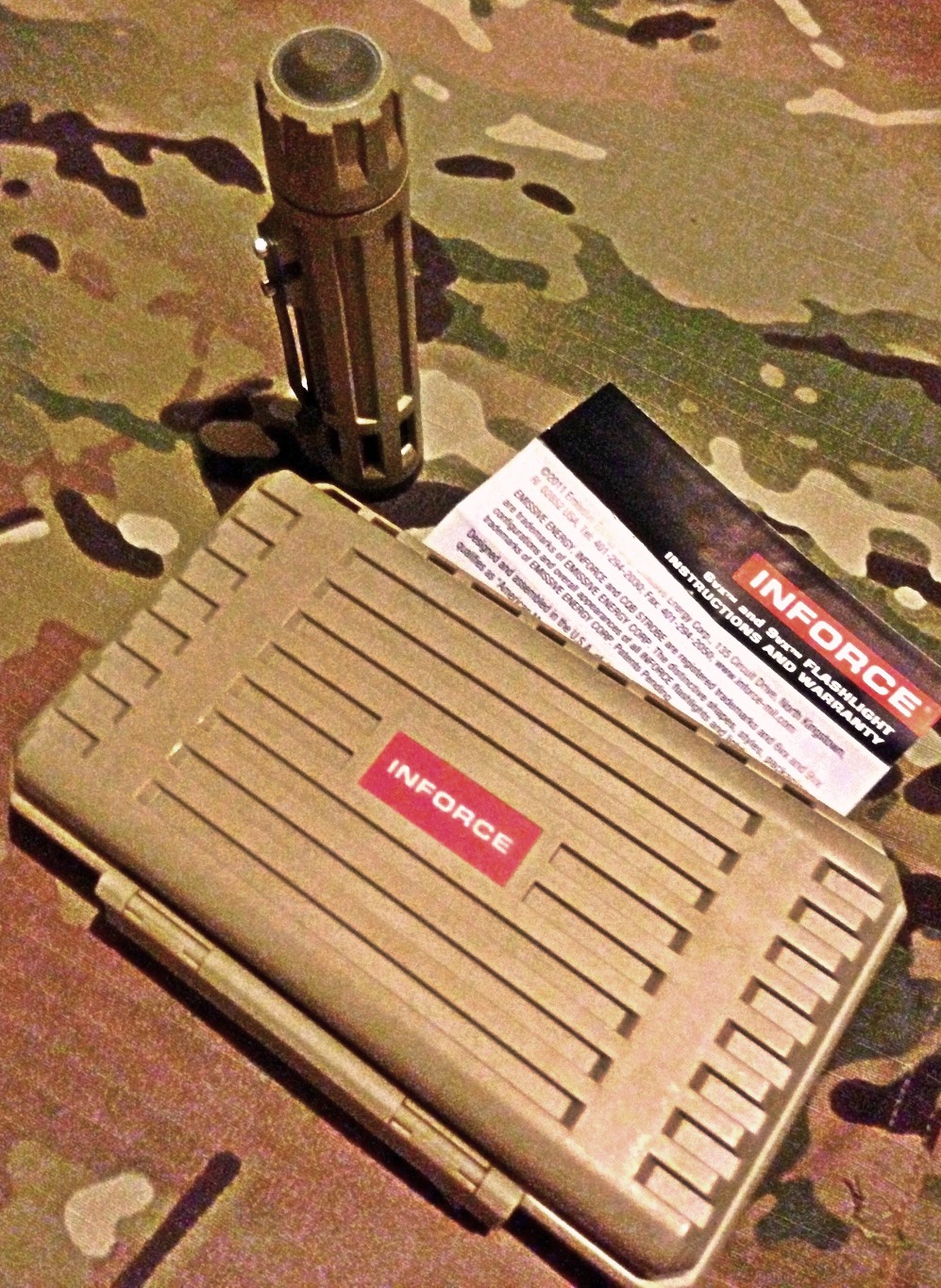 The INFORCE 6vx 200-Lumen LED Flashlight delivers a high volume of light downrange in a lightweight, palm sized, rugged package. Specifically intended for tactical applications, it would also be useful in survival or disaster preparation. The fibre composite body is heavy duty while extremely light; only 94 grams (3.3 ounces) in weight with two CR123A batteries installed. The proprietary design for the INFORCE heat-releasing venting system particularly when combine with the properties of fibre composite body exploits full LED performance and prevents the light from heating up during prolonged use. The body is sealed by O-rings to prevent water, dust and dirt infiltration under extreme conditions. Integrated on the INFORCE 6vx’s body is a belt clip with lanyard hole designed into it to take a 550 cord lanyard or retention cord. It is 12.3 cm (4.8 “) in length; it easily fits in a pocket or pistol magazine pouch utilising the belt clip for retention. My INFORCE 6vx has resided in both locations during work applications or tactical training. With its 25mm (1”) in diameter, it can be employed as a weapon light using a 25mm (1”) light mounts. The INFORCE 6vx is MIL-STD-810F certified and is available on GSA Advantage.

Momentary High (200 Lumens)- press and hold the button for more than 1/2 second; release the button to turn light off

Constant High (200 Lumens) - tap the button once. After 2 or more seconds in constant high is on for, the next press of the button will turn the light off.

Strobe (200 Lumens)- two quick presses of the button when in constant high, constant low power or off mode will activate the strobe. You may also disable the strobe using the Strobe Disable Option as described in the user manual.

The modes High/Low to Low/High are reversible by following the directions in the user manual. Run times are approximately 2 hours on Constant High or 10 hours on Constant Low. Practically, your runtime will be somewhere in between those time depending on how you run your light. 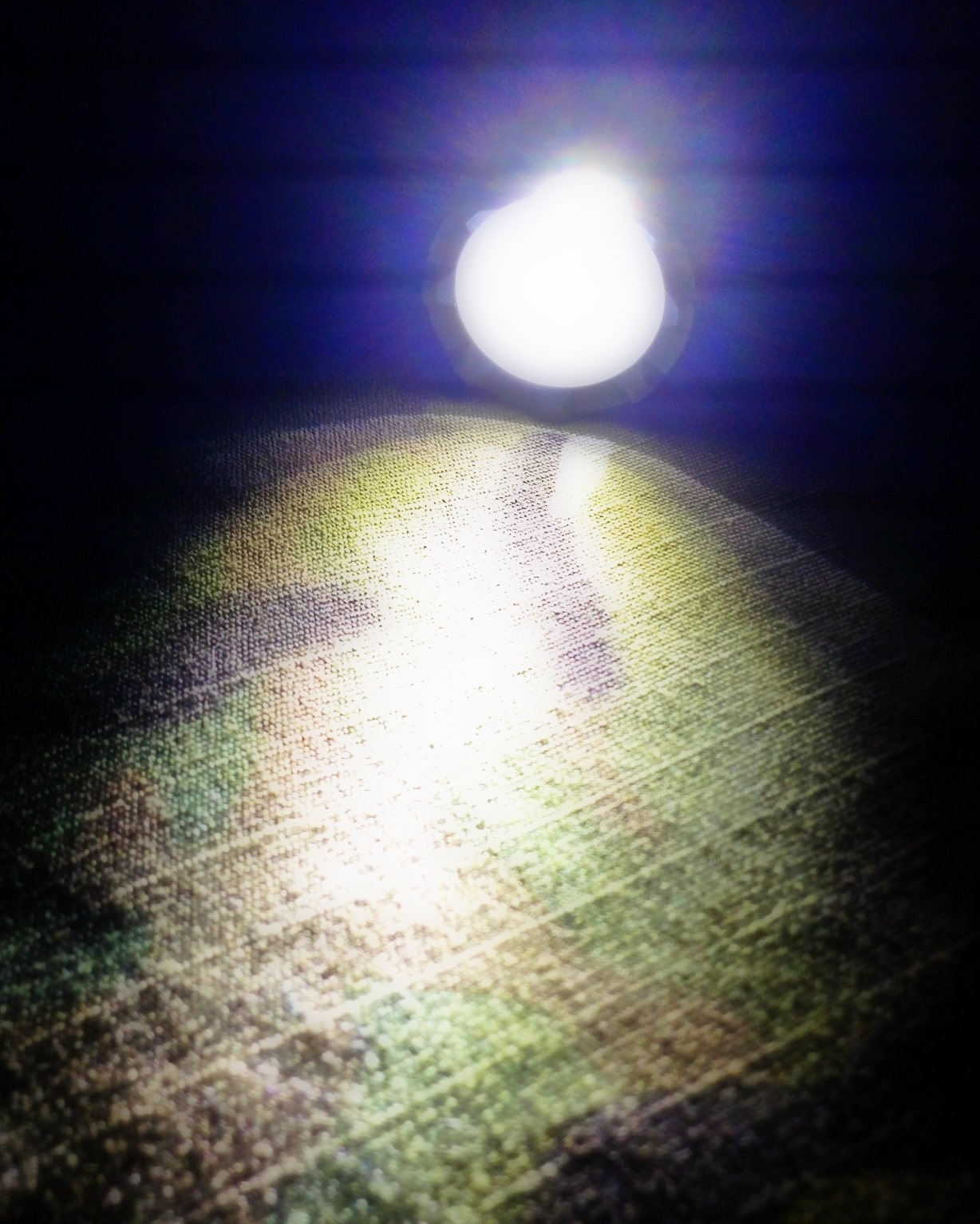 I have owned and used an INFORCE 6vx for about six months now. I used it most heavily during the Phase Line Green Tactical Low Light Course. It acted as my primary hand held during the handgun portion that made up day one. I found the light emitted to be more than sufficient for target identification out to 100m (110 yards) with a brilliant hotspot in the centre with a balanced corona to illuminate the peripheries. The strobe option was used intermittently during movement drills and was simple to activate and deactivate. The button does have a learning curve as it does not have a tactile click when operating the light. With minimal practice, I was able to employ the light effectively.

All in all, this is an effective illumination tool with plenty of power and options that you can tailor to your specific role. It is solidly constructed, weighs practically nothing, and pushes a lot of lumens downrange in a compact package. In the Tactical Trinity of Lights which includes a weapon light, primary handheld in rig or belt and a uniform pocket light, the INFORCE 6vx is a first-rate primary hand held or an excellent uniform pocket light.


Take care out there.