The Kalashnikov and all its variants are prohibited firearms within the borders of Canada. This has been the law here for some time. I am not going to discuss  Canada and its gun control laws in this blog post.

Thankfully, the VZ.58 is not a variant of the Kalashnikov. When the Warsaw Pact demanded standardization of their satellite states to the AK platform, an exception was made for Czechoslovakia. I have heard many reasons for this and it matters little for the purpose of the blog. Czech small arms maker were, however, require  to chamber the VZ.58 in the intermediate Soviet 7.62×39mm M43 cartridge, rather than the current Czech 7.62×45mm vz. 52 round. The regular Czech military had two primary models in service: VZ.58 P with a standard fixed stock  and the VZ. 58 V with a metal folding stock version for vehicle crew and airborne units. The platform entered service in 1958 until 1984 and gave good service for many years. 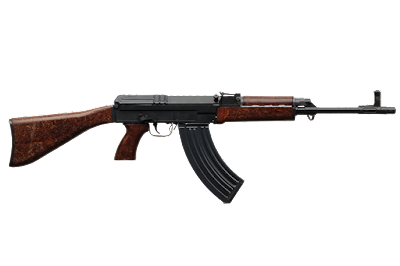 My first experience with the VZ. 58 platform was as an tactical instructor for the now defunct Smith Tactical Systems - Training Division (STS-TD). It stood up in 2005 and provide both organic and facilitated training courses in tactical pistol and carbine. The new imported semiautomatic only VZ.58 Ps and VZ.58 Vs were used along side the  AR15 platform.They provided excellent service in this role as well. So much so, I ended up procuring one for my own personal use.


In my multiple deployments to Afghanistan during the GWOT, I worked with LN forces who had been lucky enough to be issued this reliable and robust platform. The Czech government had donated thousands of these rifle to the war effort. My experience on this platform was fortuitous for these operations.


In over a decade experience with this platform, I have found it to be a very reliable, very durable weapon system that provides reasonable combat accuracy with a moderately effective cartridge.

Reliability 5/5
I cannot remember ever having a stoppage with platform. We were forced to induced stoppages using dummy rounds to practice immediate action drills during training.

Ergonomics 4/5
Like most systems designed after the Cold War, the VZ.58 was set up for alternating hand usage. Left hand changes the magazine and holds the hand guards. Right hand operates the bolt, safety and trigger. Standard. However, unlike the Warsaw Pact Kalashnikov family, the VZ has a hold open device. This increases its ergonomics score over the AK family.

Techniques have been developed modifying the VZ.58 manual of arms for modern gunfighting concepts such as support hand and control hand. While the techniques are effective and the gun can be used by trained gunfighter quite effectively, the stock setup has limitations that must be overcome.


Accuracy 3/5
Depending on ammunition quality, I was capable of reliably 3-4" groups at 100m with this firearm. At CQB distances, it is capable of precise shots. The limitations on accuracy are for  two reasons: the open tangent leaf sight and the selection of 7.62 x 39 M43 cartridge.

Durability 5/5
Over thousands of rounds through school guns and personal guns, no repairs have been required in over a decade on my VZ.58. Regular maintenance and cleaning was the only thing required to keep the firearm functioning through much heavy use. The original springs have been reliable throughout this entire time as well.

One of the drawbacks of this system is its proprietary magazine. It is NOT an AK magazine. They are distinctly different and are NOT interchangeable. Hence, the lower modularity score.

Ammunition: 3/5
7.62x39mm is an adequate round for combat/tactical purposes. It provides decent wound ballistics and good barrier penetrating capabilities. I realized my opinion on the 7.62 M43 round will not be shared but it is based on my medical training, combat experience and personal anecdotes treating personal wounded by the round.

Recently, I purchased a  CSA VZ.58 Sporter with a 472mm (18.3") barrel which deems it a Non Restricted Firearm in Canada. It is available in .222 Remington, .223 Remington (5.56 NATO), or 7.62×39mm. I purchased the 7.62 Combloc for ammunition and parts compatibility with my Restricted VZ.58. These are newly manufactured by Czech Small Arms.  There are multiple variations but the testing model had synthetic handguards, pistol grip and a M4 style collapsible stock. The 7.62x39mm Rifle model is available with either a synthetic or the traditional phenolic wood handguard.

This version of the VZ.58 represents a definite product improvement with equally durable but thinner handguards, molded pistol grip and it's adjustable M4 stock. It is a commercial 6 position M4 tube. The adjustable stock is an excellent addition to the platform. In Canada, we suffer through many drastically changing seasons.Therefore, the ability to adjust our length of pull to our clothing is a requirement for an all-season firearm.


The VZ.58 platform is a extremely dependable and rugged platform which will provide you many years good service with little maintenance other than cleaning. There is a generous number of aftermarket accessories for this system and ammunition for the 7.62x39mm platform is plentiful and inexpensive. Accuracy is acceptable within combat ranges but not good enough for designated marksman or surgical applications. The limitations of the M43 round are well documented in regards to accuracy and wound ballistics. This can be improved by selecting a different caliber variant like 5.56mm. However, quality 5.56x45mm is not as economical as 7.63x39mm. If I deployed on a private contract and was handed a VZ.58, I would not feel under armed and know I have a steadfast resilient companion. As a private owner, I know that I have a long service firearm with a cartridge capable of taking medium sized game and good for self defence.

READMA score is a WDG Blog scoring system conceived around an experienced end user impressions, not technical expertise or SME standard. This scoring, based on the user's experience and satisfaction, is scored from 0-5. The higher the number the better the score. The criteria was selected based on practical operational requirements and are equally weighted.
Posted by Whiskey Delta Gulf at 08:00:00

Email ThisBlogThis!Share to TwitterShare to FacebookShare to Pinterest
Labels: Firearms