Survival Bug Out - A Guide to Gear and Strategy 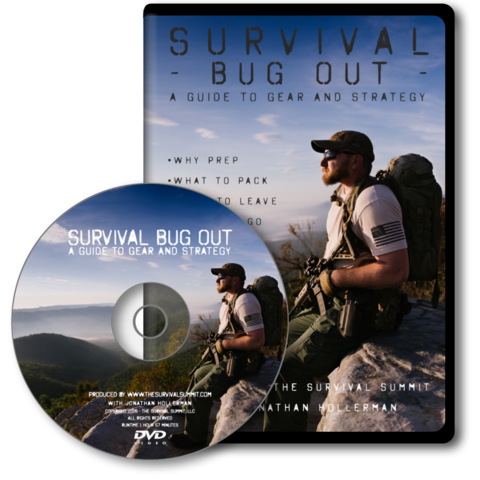 Survival Bug Out - A Guide to Gear and Strategy is produced by The Survival Summit. This production company and survival blog  produces a whole series of high quality, relevant, preparedness training videos which are available in DVD or downloadable format.

Before I start this DVD review, there are a few things that need to be disclose for the sake of honesty. I know one of the owners of The Survival Summit and consider him a good friend. Secondly, while I receive no remuneration for this or further DVD reviews; I did not purchase this DVD or other DVDs from The Survival Summit. As you know already, friendship does not mean a free pass on this blog.

Survival Bug Out - A Guide to Gear and Strategy is hosted by Jonathan Hollerman. He is a retired United States Air Force (USAF) SERE Instructor and the owner of Grid Down Consulting.  For those that do not know SERE stands for Survival Evasion Resistance & Escape.  Throughout the video, the instructors depth of knowledge and experience in the subject was indisputable. I have no small experience living out of a pack for long periods as an infantryman turned combat medic. There are subtle knowledge bombs dropped throughout the video in all areas of discussion.  There were a few tricks that I pick up from this video to add to my repertoire after all these years. He does discuss the reasons for preparedness and bug out capabilities at various points throughout the video. I thought these were important but, at times, they bordered on preaching.

The video format is laid out in a logical sequence that addresses bug out principles appropriately. First, Hollerman discusses terminology important to Gear Selection and breaks down his strategy into Bag Types according to context. This plays a significant role later as he discusses contents later in the video. Hollerman breaks down bug out bags into four types: Get Home Bags. Assault/Day Packs, Bug Out Bags and Lone Wolf Packs. He describes the context and role of each indepth. One tidbit that I will share and I specifically appreciate: once reaching your safe area or bug out location, repack your Bug Out Bag into a Lone Wolf Pack. You will have to watch the video to find out Hollerman's sensible reasoning for this recommendation.

Next, Hollerman's program lays out what he recommends as a Core Needs. The 5 Core Needs are Water, Fire, Knife, Flashlight and First Aid. He describes his principles and preferred choices in each area. I was very happy to see water as the first core need. Hollerman's layered approach to water purification and hydration management is very similar to my own approach. He lays out a good bit of fundamental knowledge in the Core Needs section.

The video then goes into Extras. This is gear or supplies that are not Core Needs but are important when carried in the context based on Hollerman's principles of Bag Types. Extras covered include: Food, Paracord, Poncho, Seeds, Accessory Pouch, Saw, Sleeping Bag, Compass, and Clothing Selection, Hollerman recommends products and gear that he has background with. The fundamentals he talks about are solid. The specific selections are convenient to people being introduce to the subject but it does set an expiry date for some data. Technology and gear will change.

Finally, he talks about Tactical Gear. It is appropriate to leave this subject to the end of the video as I feel too much time is spent on it on social media and forums. Hollerman discusses general Tactical Gear, Battle Belt and Holster, Armor and Sling selection. This area is extremely subjective and experience based. I found his choices to be sound and prudent. I use many of the same or similar products.

The production value provided by The Survival Summit is excellent. The video is clear and angles precise. The dialogue is intelligible with fitting music accompaniment.

Survival Scenarios Trailer from The Survival Summit on Vimeo.

Survival Bug Out - A Guide to Gear and Strategy, produced by The Survival Summit, is a first rate introduction to concepts by a experienced host. It rips through a lot of the online bravado and cuts right to the heart of the matter. Are you Ready? It is a recommended addition to your training DVDs!

This is the first in a series of DVD reviews for The Survival Summit. The next video we will be assessing is Survival Land Navigation.