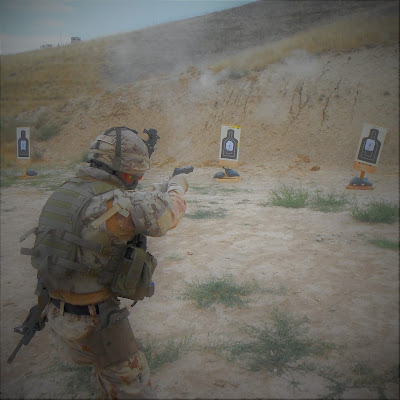 Diagnostic checking during a weapon transition is wasted time. Some people call it a chamber check but that can be confused verification of weapon status.

Diagnostic check: (verb) the act of reflexively canting a weapon that does not fire to the left and inspecting the bolt or slide position to diagnose the stoppage.


If you are within CQB range addressing a threat and your weapon has stopped firing, time is of the essence. The time wasted needlessly checking the chamber equals time not spent servicing your threat and more time for the threat to shoot you. You can see why your primary stopped working after you made the area safe.

Additionally, diagnostic checking will momentarily take your eyes off the threat. This too will increase the time required to service the threat once you get your secondary out. First, you will need to reacquire your threat with your eyes and then align your sights. If you do not chamber check and maintain eyes on your target, you will simply align your sights. Again no time wasted.

"Shifting your focus between threats and your rifle that just became a club is not a value added step."

It, also, degrades your situational awareness by trying to process complex concepts during sympathetic nervous system (SNS) activation. Close range vision can be degraded during SNS activation. Observing your chamber and trying to diagnose the stoppage during a close range gunfight will take longer than when you practice it on the range due the SNS effect on your vision. Attempting to refocus on your threat after examining your chamber will take more time as well. Assuming your threat hasn’t bounded or relocated position, of course. Bad guys know about the rule about shooting, communicating and moving too. Shifting your focus between threats and your rifle that just became a club is not a value added step.

The key to being quick is not to be fast, but to shoot sooner. Don't waste time with diagnostic checking during a weapons transition. It is a range-ism and out-dated. You have the rest of your life to diagnose stoppages after the threat has been eliminated.

If you are behind hard cover or greater than CQB distance away and you think you can safely complete an immediate action or remedial action. Then go for it, a rifle calibre beats pistol calibre any day of the week.


I wholeheartedly agree with attempting to put the weapon on safe while transitioning as it is a valued added step and can be done simultaneously.
Posted by Whiskey Delta Gulf at 11:24:00