"Don't you teach 'em knife fighting. Teach 'em to kill. That way, they meet some sonofabitch who studied knife-fighting; they send his soul to hell." -SPARTAN, 2004

There I was at a local range a few months ago; the RSO was talking to me about a female friend  who was interested in shooting. The conversation went in a different direction when he said “she lives in a bad part of town to and feels she may need protection.” Immediately, I offered my assistance as this wasn’t just about recreational shooting anymore. He rebuffed my attempt at collaboration stating “I will teach her to shoot.” To which I replied ”we are not talking about shooting anymore; we are talking about gunfighting.”

From the look on his face, I easily determined that he did not know the difference. To be fair, the gentleman in question has little to no tactical experience and no operational experience in law enforcement or military matters. He is a very experienced range manager and active recreational shooter.

"It is hard to make this clear to a man who has never been in a gunfight. ” - Wyatt Earp

Shooting is the act of using a firearm to hit its intended target. For simplicities’ sake, we will use the platform of handguns for this discussion. Good handgun shooting comes down too three things: grip, sight alignment and trigger control. With practice and coaching, many people will achieve their desired goal of achieving good groups and a proficiency with their personal handgun. Hobbyist can practice when they require some rest and relaxation.

Gunfighting is a confrontation between two or more people using firearms to settle the argument or conflict. Running that same handgun in a defensive or tactical situation requires pistolcraft, not just simple shooting proficiency. As a wise man once said, "Shooting is ten percent of the gunfight. A fundamental piece.” But, it is a small part of the equation. It requires tactical proficiency, use of cover and concealment, understanding the difference between cover and concealment, adverse lighting conditions, support hand only training, primary weapon hand only training, lateral movement training, shooting on the move, extreme close quarter shooting, legal ramifications, use of force and reality based training.  This is, by-no-means, a comprehensive list of required gunfighting skills either. Self-defence or tactical oriented shooters practice from the necessity that failure is not an option or to maintain a professional level of skill. It is a mindset, a lifestyle and, to some, a profession.


Does this mean competition is of no use to the self-defence oriented shooter? Absolutely not. It is a great way to create some stress and think while moving with a gun in your hand. It is discussed more thoroughly in this “Action Shooting Competitions” article from a few years ago.

So, a ‘tactical’ shooter doesn’t need shooting instruction or coaching? Far from it. As discussed above, accuracy is a fundamental of tactical proficiency.  My personal doctrine on developing tactical proficiency is well documented in “Five Fingers of Tactical Proficiency” article published over half a decade ago. 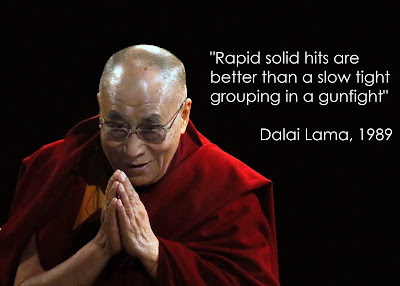 My primary reasons for addressing this subject is to illuminate the fundamental differences between shooting and gunfighting. I have been fortunate to be trained, coached and mentored by some phenomenal shooters and gunfighters.

A good shooting instructor is very useful for developing the fundamentals of shooting for both sport and self-defence. Shooting is NOT gunfighting.

Choose your mentor appropriately for the context you wish to learn.