There are a few common myths within First Aid and Tactical Trauma Care that will not go away. Worse yet, they are dogmatically propagated Ad Populum with significant evidence to the contrary. Ad Populum is Latin for "argument to the people". It is the erroneous reasoning that presumes that a proposition is true because of its popularity: "If many believe so, it is so." This is epidemic in the Internet Age especially in the tactical community.

The first myth goes back many decades and that is the practice of stacking dressings on a bleeding wound in a futile effort to stop the hemorrhage. Constantly stacking fresh dressing on top of blood soaked dressings is only keeping the emergency scene tidy. It is not stopping the bleeding. The premise taught was that you did not want to disturb any possible clot that had formed by removing the initial dressings. Well obviously, there is no clot form as the casualty is bleeding through multiple bandages. You are just soaking up blood as your casualty bleeds to death. The casualty needs a different intervention. I remember being taught this as a young infantry soldier during my annual mandatory St. John’s Ambulance First Aid course over thirty years ago. This myth still persists today! Why? Decades of mandatory annual minimum standard qualification training ingrained by well-meaning instruction has made this technique popular and therefore true because the majority believes to be. 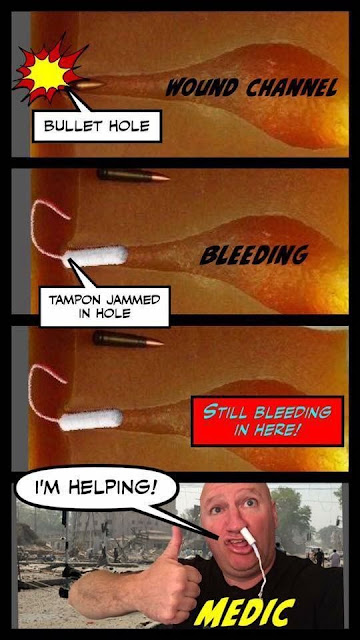 The second myth is the use of tampons for penetrating trauma especially gunshot wounds (GSWs). The exact history of this belief is not known. I remember reading it in a Vietnam War book many years ago but I cannot tell you the name of that book. More recently, it has been attributed to SOMA 2008 and a presentation given by a combat medic there. It doesn’t really matter. Penetrating trauma especially GSWs rip and tear tissue all along the wound channel.  Vasculature damaged in that wound channel is the root cause of the life threatening hemorrhage. Unless the wounded area is amenable to a tourniquet, direct pressure must be placed against the sides of the wound channel to stop the hemorrhage. This is accomplished through wound packing the ENTIRE wound channel combined with significant directed pressure on to the superficial anatomy above the wound. In some cases, hemostatic dressings and indirect pressure may be required adjuncts. So, riddle me this: how is plugging the most proximal portion of the wound channel going to stop bleeding distally? Simple, it isn’t. But, the idea of plugging a tampon into a GSW is easy and stops obvious external bleeding. Remember people can bleed to death internally without any obvious external blood loss. There are four main cavities that a casualty can hemorrhage a significant percentage of their blood volume into: intrathoracic, intraperitoneal, retroperitoneal, pelvis/thigh. The use of a tampon just hides external bleed as your casualty bleeds to death internally. Again this myth persists today because tampons are easy to find, simple to use, and it is popular with those who don’t understand the basic of hemorrhage control who propagate it dogmatically.

My favourite internet trauma expert response to a rational discussion on this subject is the ‘doctors use them for nose bleeds’. This is a Non Sequitur argument. Non Sequitur is Latin for "it does not follow". In a Non Sequitur argument, the deduction can be true or false, but the argument used to support the deduction is not true. One of the possible interventions for epistaxis is nasal packing using a specific nasal tampon. The word tampon originates from the verb: tamponade which means the blockage or closure of a cavity or wound site.  That is the only link between epistaxis and feminine hygiene products.

The propagation of these myths could have been halted years ago with proper education in First Aid and Tactical Trauma Care before voicing anecdotal opinion on the Interweb. Medical training isn’t sexy. It requires an evidence based approach rooted in strong fundamentals with continual innovation like the military TCCC program or the law enforcement TECC program. This means didactic learning before any practical training. You have to know why you are doing something before you start doing it! Recently, there has been a surge in interest in tactical medicine training. This has resulted in an increase in charlatan Tacmed course that propagate myths, teaching heavily dated syllabuses with intense practical training without classroom instruction.

For many, these courses are ‘enter-train-ment’. ‘Enter-train-ment’ is describing people who take courses for not only education or skill development but as part of a vacation or leisure activity. There is nothing wrong with this and I encourage it. But, there will be one or two who will need these skills in real life to help a member of their fire team, partner on patrol, or a loved one. It is for these people we need to promote interventions and medical devices with proven efficacy. Not for internet popularity or financial bottom lines.
Posted by Whiskey Delta Gulf at 10:00:00