I was travelling to Ontario for the first time in many years and took the opportunity to visit an old friend; Darren Cole. As the president of One Shot Tactical Supply, he has brought his company from the basement of a farm house to an online store to a large retail outlet servicing civilian shooters, military units, and police agencies in Canada. 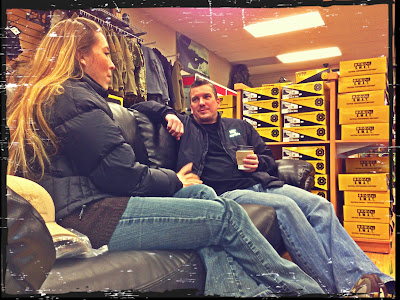 ECHO TANGO 308: You and I first met when you came up to Canadian Forces Base Petawawa to drop off some gear to soldiers deploying to Afghanistan. That was in 2005. At that point, I bought from you a High Speed Gear Industries Holster for my issue 9 mm BHP and a Blue Force Gear contractor pack for my C7A2. One Shot Tactical Supply has come a long way since then. Can you share why you started this growing company? Where does the name come from? And what separates you from the other tactical gear companies in Canada?

Darren Cole of OSTS: I was having trouble finding items for myself and the limited Canadian companies that existed at that time really didn't stock anything. I was told that the vest I wanted would be a six month wait, which was just silly. I was playing around with starting other companies at that time and figured why not start one selling gear that I couldn't find in Canada.

The name actually came from my wife, based on the idea that I was going to market items towards CF snipers. We were placing initial orders with HSGI and Tactical Intervention for sniper related gear. It expanded quite rapidly from that though, as clients wanted more and more items. It was also quite easy at that time to start working with up and coming companies like Blue Force Gear as well as existing companies like Knights Armament since they were not being represented in Canada like they should have been.

I think there are a number of things that separates OSTS from other companies. Our reason for starting the company, our lack of political correctness, the fact that we deal direct with all of our key suppliers, and we provide our gear to those who need it, rather than selling anything to anyone who will buy.

We also fall into our own little niche in Canada as we are a retail tactical gear company that sells firearms, weapons platforms, vehicles and other items.

ECHO TANGO 308: Why is One Shot Tactical Supply located in Trenton Ontario?

Darren Cole of OSTS: It was like coming home for me; as my parents grew up in Trenton and Belleville, had lots of family in the area, and visited all the time. When I quit my full time job as manager of a horse farm, we needed to move off the farm as the house came with the job. We picked Brighton and I was working out of the house for awhile. When we ran out of room in the basement for gear, a store was the logical choice. Trenton was the obvious choice being just down the road.

Echo Tango 308:The Blue Force Gear contractor pack is still going strong after all these years. That was before the BFG VCAS! Blue Force Gear has a great product line; that includes slings, pouches, chest rigs, plate carriers and much more. Can you tell me more about the 2013 line?

Darren Cole of OSTS: When I hooked up with Blue Force Gear I couldn't believe how well the Contractor Pak sold, that was until the Vickers Sling came out. Blue Force Gear is one of the best companies we work with in regards to service and products and I’m glad to count them as close friends. BFG continues to innovate and push the limits of what is expected from gear. 2013 will see more of the MOLLEminus items including chest rigs, belts and plate carriers. A couple of concealed carry items like the new HIVE pack and the entire nylon line being launched in the Wolf color to match Arc’teryx’s clothing. This is already in demand and we plan to stock quite a bit of it.

ECHO TANGO 308: Can you tell me more about BFG's Helium Whisper? And what these radical changes represent for the tactical operator?

Darren Cole of OSTS: When I first saw the concept, I actually did think “oh my God.” How can I promote that to Special Forces? It’s going to fall apart. After using it myself, seeing testing, and hearing feedback from the first users in the field, I am a true believer. The great part is how much weight it cuts and still maintains the strength needed. The pouches are about half the weight of similar pouches by other manufacturers which means pounds removed from a soldier’s gear when fully geared up. You can either use this to save weight for airborne operations or to carry more water, ammo, batteries etc., and seeing as the material doesn't absorb water; guys aren't adding pounds onto their gear from waterborne ops.

ECHO TANGO 308: Knight's Armament Company makes some of the best firearms and accessories for tactical operators in the world. Do you carry the firearms, accessories or both? What types?

Darren Cole of OSTS: We are the exclusive distributor for Knights in Canada and carry the full line of products however some items we only market and sell to government agencies like the night vision and thermalsights, the LMG, suppressors and a few other items.

We have regular shipments of SR-15s coming in every few months in different configurations and we finally have more SR-25’s coming back to Canada after US Dept of State denied our export certificates a couple times.

The accessories are something we try to always have in stock but even items like the Triple Tap sell out quite quickly.

ECHO TANGO 308: I am seeing a lot of dead bird (Arc'teryx) LEAF clothing in the store. I like dead bird, especially LEAF. You carry the entire Arc'teryx line? And, what can we expect from them for 2013?

Darren Cole of OSTS: We can provide the entire Arc’teryx LEAF line and do provide a 20% discount to Military or Law Enforcement on the regular priced Arc’teryx gear. We are building up our stock in the store to make sure we can service our clients more effectively.

For 2013 Arc’teryx is moving back into packs aimed directly at the military and you’ll be seeing a lot of co-operation as well between Arc’teryx and Blue Force Gear on a number of these items.

ECHO TANGO 308: Your product line has grown from a few just rigs in your basement to selling assault vehicles, night vision and state-of-the-art firearms and accessories. Obviously, there are restrictions on what can be purchased by a civilian and by government agencies? Is a large part of your business government contracts? Does that mean the individual customer purchasing is any less important to you?

Darren Cole of OSTS: Our mission from the start was to provide the guys on the pointy end of the spear with the best products, and we continue to keep that as our focus. Due to that we have secured a large amount of government business for those agencies that realize when you buy the best, it doesn't fall apart and it allows troops to be more effective.

About 75% of our business is to government however our individual clients are still very important to us. It’s these individuals who have been with us from the start and helped us secure a good part of the government sales due to them pushing it up the chain of command or moving into purchasing positions.

ECHO TANGO 308: Recently, you posted on the OSTS Facebook page that you turned down a $10,000 order from a suspicious person who was going to take it all back to China. You also stated that this was not the first time that you had to do this. Obviously, this was so the equipment can be taken back to China to be knocked off. How often does this sort of thing happen? What is the responsibility of distributors to avoid knocked off products? And what does that mean to your customers?

Darren Cole of OSTS: It probably happens more often than we realize, but sometimes it’s more obvious than others, which helps us prevent it. This person actually had a print out of every Arc’teryx LEAF product and wanted one of each. Sadly it happens in Canada and the US as well. I think there are multiple reasons for it including the push for lowest bidder by Public Works, the race for more and easier money, the influx of military simulation hobbies, and the demand for cheaper products from society in general. We are use to cheap, instant, disposable gratification in this day and age, which should have been delivered yesterday.

I try to do what I can to prevent it but you can’t stop it. The fact that the CF itself has bought knock off gear including climbing/rappelling items which endangers life even when not in a conflict, is appalling. We have as well turned down quotes from government when it specifies knock off Chinese made products. They usually buy it anyway but it won’t be from us.

ECHO TANGO 308: How was SHOT show this year? Any interesting new product lines you want to announce?

Darren Cole of OSTS: SHOT was crazy this year with a large part of the focus being on Obama’s possible assault weapons ban.  While the focus has been how it goes against the Second Amendment and what it means for US citizens, a few people were realizing what that would mean for both the US and Canadian Forces.

Companies innovate when there is a large healthy market, and retreat in a limited highly regulated market. If you suddenly ban 30rnd magazines from being owned by civilians, how many companies are going to keep making them or developing new ones without firm government contracts. How about weapon technology, rail systems, sights and optics and slings? Both the US and Canadian Forces will start to have less and less options very fast.

As for new product lines, we are working with a few new companies including Legion Firearms, Armasight, Paradigm SRP and MATBOCK. We have a couple more we are firming up but the main focus for us this year was to spend more time with our key suppliers making sure we have product available for our clients.

ECHO TANGO 308: Do you still include goodies and magazines in the packages you send to deploy Canadian soldiers?

Darren Cole of OSTS: Actually with the withdrawal from Afghanistan, we haven’t sent any packages overseas in the last little while. We do have a number of guys who drop into the store before leaving though which is always nice.

One does not simply leave One Shot Tactical Supply without a purchase especially if you are Military or Law Enforcement. I needed a new daypack; so ended up leaving with a Maxpedition Condor II. But, more on that another time. One Shot Tactical Supply is located at 45 Front Street, Trenton, Ontario. Contact them by phone: (613) 394-5023. Or, by email. OSTS, also, operates a FaceBook page; 'Like' them and get regular updates on incoming products, sales and special events.

This interview was edited and condensed for blog publication